The autotrace program accepts bitmap graphics from the file inputfile specified on the command line, and as output produces a collection of splines approximating the original image, the converting the image from bitmap to vector format. It behaves in a manner similar to the commercial software known as *tream*ine or *orel*race. The result is sent to standard output unless the -output-file option is active.

We are using Inkscape to apply a path tracing filter to called Centerline tracing, or autotrace, to an “automatic drawing” made in pen in 1946 by Asger Jorn. The drawing would serve as the basis for a series of works made by Jorn and invited others to find new novel forms among the randomly made lines by removing “superflous material” to reveal an underlying image. Autotrace is a free software project initiated by Martin Weber that according to the man(ual) page, compares itself to commerically implemented algorithms like Adobe’s Streamline and Corel Trace (though removing key letters to avoid direct citation).

According to the SVG specification, a path definition is a sequence of coordinates and commands that instruct a virtual pen to trace the forms of a shape.

he “Move to” command is called with the letter M. When the parser runs into this letter, it knows it needs to move to a point. So, to move to (10, 10) the command to use would be M 10 10. After that, the parser begins reading for the next command.

There are five line commands for <path> nodes. The first command is the “Move To” or M, which was described above. It takes two parameters, a coordinate (x) and coordinate (y) to move to. If the cursor was already somewhere on the page, no line is drawn to connect the two positions. The “Move To” command appears at the beginning of paths to specify where the drawing should start.

There are three commands that draw lines. The most generic is the “Line To” command, called with L. L takes two parameters—x and y coordinates—and draws a line from the current position to a new position.

The cubic curve, C, is the slightly more complex curve. Cubic Béziers take in two control points for each point. Therefore, to create a cubic Bézier, three sets of coordinates need to be specified.

Darija Medić: On the gaydar: A 100-year challenge for facial recognition

By relying on prenatal hormone theory and its implication for the connection between facial traits and hormonal influences on sexuality, the study reveals the presumption that sexuality is not a personal choice, but is bound by biology. If that relationship is understood as a given, the ramifications are far from subtle for further types of correlations based on facial recognition (racial, gender, and political discrimination just for starters).

To list a few of the issues at hand, prenatal theory relies on homogeneous datasets of individuals coming largely from one country. A physical ‘biological’ feature can have a different purpose, depending on the culture the individual is from. Sexuality, let alone gender, is also contextually different from culture to culture. Both are now largely accepted to be fluid, stemming from the research done by Alfred Kinsey in the 1950s. And speaking of fluid, the ‘gaydar’ study referenced in the Guardian was created based on determining heterosexual and homosexual preferences; it doesn’t cover transgender and bisexual preferences. This limited spectrum of sexuality is questionable: How valid is the sample used? Does the approach used in the ‘gaydar’ study to define sexuality reduce our understanding of both gender and sexual preference as binary and naturally given?

Darija Medić
On the gaydar: A 100-year challenge for facial recognition
https://www.diplomacy.edu/blog/gaydar-100-year-challenge-facial-recognition 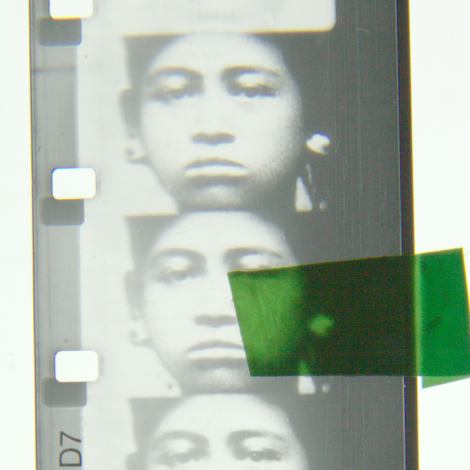 With The Recognition Machine Antje Van Wichelen translates her years of research into photographic archives from the colonial era into an artistic-political installation. The machine looks like an ordinary Photomaton but uses the photograph of the spectator as the starting point for a search through the archives that Van Wichelen collected and edited.

Contemporary algorithms link the pixels of the new photograph to an anthropometric photograph of someone from the nineteenth century. The installation confronts the viewer with the uncomfortable reality of Belgium’s violent colonial past but is also an invitation to actively search for the historical context of the image, and to report on that both factual and personal search.

ANTJE VAN WICHELEN is a visual artist who has been working for years with experimental 16mm film techniques from the nineteenth century to unlock and edit colonial, mostly photographic, material. Her project 21C/19C _ Procedures for Anthropometric Image Reversal investigates the collective memory of colonial classification systems. Until June 2019 she is artist in residence at the Rautenstrauch – Joest Museum in Cologne, where she will also exhibit her work. Van Wichelen is a member of LABO BxL and founder of the Greyzone Zebra Collective.

At this level, all structures are dissolved, or, rather, those that constituted the essence of the clinical gaze are gradually, and in apparent disorder, replaced by those that are to constitute the glance. And they are very different. In fact, the gaze implies an open field, and its essential activity is of the successive order of reading; it records and totalizes; it gradually reconstitutes immanent organizations; it spreads out over a world that is already the world of language, and that is why it is spontaneously related to hearing and speech; it forms, as it were, the privileged articulation of two fundamental aspects of saying (what is said and what one says). The glance, on the other hand, does not scan a field: it strikes at one point, which is central or decisive; the gaze is endlessly modulated, the glance goes straight to its object. The glance chooses a line that instantly distinguishes the essential; it therefore goes beyond what it sees; it is not misled by the immediate forms of the sensible, for it knows how to traverse them; it is essentially demystifying. If it strikes in its violent rectitude, it is in order to shatter, to lift, to release appearance. It is not burdened with all the abuses of language. The glance is silent, like a finger pointing, denouncing. There is no statement in this denunciation. The glance is of the non-verbal order of contact, a purely ideal contact perhaps, but in fact a more striking contact, since it traverses more easily, and goes further beneath things. The clinical eye discovers a kinship with a new sense that prescribes its norm and epistemological structure; this is no longer the ear straining to catch a language, but the index finger palpating the depths. Hence that metaphor of ‘touch’ (le tact) by which doctors will ceaselessly define their glance. (Michel Foucault, The Birth of the Clinic: An Archaeology of Medical Perception, pp121-122)

History of an image scraper “Shinn’s motel room contained 26 stolen books and a file full of inventory cards for another 154 volumes. He was well-educated in book history, restoration and binding, and the tools of his trade filled the room: color-stained cloths and Q-tips with jars of shoe polish, used to color-match and conceal library markings on book spines. A folder of facsimile title pages, used as replacements when a book’s true title page was stamped or contained other identifying marks. All were designed to remove libraries’ marks and render the stolen works unidentifiable and thus saleable to unsuspecting book dealers and collectors. Additionally, Shinn’s tool kit included stolen license plates, false ID papers, manuals for safecracking and disarming alarms (as well as a guide titled “How to Disappear and Live Freely”), and a 32-caliber pistol.”

A certain indeterminacy of color, neither cerise nor taupe nor burnt umber, nor gray either

Fragments from Eric Schwitzgebel’s Why did we think we dreamed in black and white?

Prior to the rise of scientific psychology, scholars interested in dreaming generally stated or assumed that dreams have color. For example, Aristotle specifically includes colors among the remnants that sense-impressions may leave in the sense-organs and which thus appear to us in sleep (459a23–462a31, in Gallop, 1996). Epicurus describes the impressions we have in dreams as having color and shape (15A, in Long & Sedley, 1987). Descartes in his Second Meditation (Descartes, 1984; originally published 1641) describes a bit of wax as seeming to change color and wants to grant that such an appearance could come to him in sleep […]
Early scientific psychologists working at the end of the nineteenth century still implicitly treated dreams as colored. For example, by my count, 50% of the long dream reports (that is, reports over 15 lines of text) in Freud’s Interpretation of Dreams explicitly mention colors other than black, white and gray (Freud, 1931; originally published 1900). Presumably, that percentage would be even higher had Freud been inclined to ask whether there was color in dreams in which it was not spontaneously reported, […] and Titchener (1900) mentions ‘flashes of color’ as a primary cause of dreams. The shift appears to occur in the early twentieth century, in some cases among the very same researchers who previously assumed that dreams were colored: by 1900, a research assistant of Calkins reports that although 81% of a sample of her dreams involved visual experiences, fewer than half involved color sensations (Calkins and Andrews, 1900); and Titchener (1912) grants that some people see only shades of gray in their dreams. Bentley (1915) reports four times as many grays as colors in his sample of dreams. Twenty years later, Husband (1935) finds 40% of respondents to deny having color in their dreams.
What might explain the rise of the opinion that dreaming is predominantly a black and white phenomenon? It will likely have occurred to the reader that the first half of the twentieth century was the pinnacle of black and white media. Black and white photography was first made public in the 1830s, and became increasingly popular through the early twentieth century. […]
It is surely not chance that this flourishing of black and white media coincided with the flourishing of the opinion that dreams are a black and white phenomenon. The question is what to make of this fact.

END_OF_DOCUMENT_TOKEN_TO_BE_REPLACED

A self learning genetic algorithm finding its way through the maze of Super Mario’s games. Exhibiting a behavior similar to Shannon’s mouse in the previous post.

“Airbnb is a global hotel filled with the same recurring items. Bed, chair, potted plant, all catered to our cosmopolitan sensibilities. We end up in a place that’s completely interchangeable; a room is a room is a room.

An algorithm finds these recurring items and replaces them with the same items from other listings. By clicking them, you can jump between rooms and explore the global hotel. There are many homelike places.

Outcome of a week-long web scraping workshop led by Jonathan Puckey at Non-Linear Narrative, a masters programme at the Royal Academy of Art The Hague.”

Thanks to Sam Mercer for the tip