A white binder called S.I.S.V. Fotoarkiv. Registrering 1985-87 catalogues all the images of the photo archive.

At some point in the 80s, Stephanie Nørgaard started an internship at the museum (then still called the Silkeborg Kunstmuseum). According to Troels Andersen the archive had been in quite a state of disorder before her work. The resulting typewritten documentation (the white binder) is both a snapshot of the archive and has served as a useful starting point and guide to understanding it's structure. (Source: Ellef, interview with Troels) 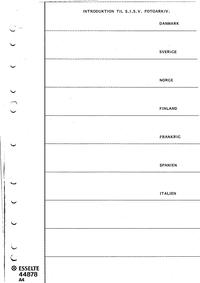