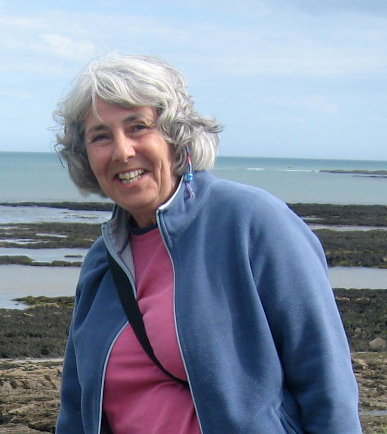 How did you get to work with the archive in the first place?

I moved to the area around Silkeborg in August 1975. I was a frequent visitor to the museum and I was fascinated by the paintings of Jorn and the collection he built up. I was working as a peripatetic English teacher with Århus Amt and when the contract finished I became unemployed. I think I went along and asked Troels Anderson if there was a possibility of a job under the half and half scheme. In May 1985 I was offered a ‘job’ (half paid by the unemployment people and half paid by the Museum for 6 months). I jumped at the opportunity.

After working in the café and helping with the mail orders, checking the Museum’s signposts, translating an audio/video short film script and generally doing/helping with anything for six months, Troels took me down into the cellar and showed me 12 cardboard boxes. He explained that the boxes held a collection of contact negative sheets and developed photographs that were to be the illustrations for a project Jorn had started in the beginning of the 1960s. Jorn intended to publish “10,000 years of Nordic Folk Art” in 32 volumes (Only 28 volumes at one time). Troels then went on to explain that most of the photographs had a code on the back but nobody still alive had any idea of how the code worked. The French photographer Gérard Franceschi was in a home in the south of France and Jorn himself had passed away. (I never heard anything about the other photographer, a Dane called Ulrich Ross) The only other person who had had any dealings with the archive had been the caretaker at the Museum’s previous site and he, too, was no longer with us. Due to the falling out between Franceschi  and Jorn in 1965 ? the archive had been put into the 12 cardboard boxes and stored. Troels said how he had noticed (over the previous 6 months) I seemed ‘sufficiently mad enough’ to warrant being asked if I wanted to work with the boxes and make an accessible archive. After carefully peeping at a couple of the photographs I had no hesitation in saying ‘yes’. I believe that from then on I was technically paid by SISV…unless that was just a Troels joke!

One box was brought up to what became my working area…a lovely light and airy room overlooking trees and grass alongside the other offices. Troels explained how VERY important it was to mark wherever I took anything out from…in case there had been some logic to the contents of each box. Using the light box the negatives shone the most incredible images I had ever seen and, incidentally, (although this seems a bit dramatic and exaggerated) my life was changed.

Could you describe what kind of work you did with the archive and what state it was in (order/disorder) before you started?

As I mentioned the archive was in 12 cardboard boxes. They were dry but as far as I remember there was paper and card sticking out of the top of each one and they were dusty! I remember bringing the first one up and then I worked methodically through each box. I am not sure after all this time if the boxes were in order according to the subjects as per the proposed volumes or places visited. Probably places where the photos were taken. Seloptape only lasts 13 years and metal paper clips leave rust marks, so great care always had to be taken not to separate negatives, contact sheets and any notes!

The first job was to see if I could find any part of the code that could be understood…..As far as I can remember I started with some negatives that were easy to identify. We had lots of reference books in the museum library and most importantly ‘Signes Gravés Sur Les Églises De L’Eure Et Du Calvados’ Bibliothéque D’Alexandrie – Vol.2.

I think my starting point was the negatives and photographs that were used as illustrations in Signes Gravés. Having travelled in France I knew that each French Region had an official number and each Departement also. (As seen on number plates even today!) So comparing the code on the negative with the information available in the printed book (SG) I began to see how the code was made up….I also had Franceschi’s notebooks, (written in French) and a couple of well-worn, annotated maps.

It took a long time before I was convinced that the code was geographically based but as more and more photos of known artefacts and places conformed to the code the more confident I became. It must be understood that I worked COMPLETELY under the supervision of Troels Anderson and with his help and extensive knowledge we tested the code together. Troels had the pictorially planned work for the first 3 books….I don’t remember that being among the boxes, so we used these to test out and check the code. The enlargements in the boxes were drawn on to show the cropping Jorn wanted.

Only then could the unpacking and rehousing in the filing cabinet drawers begin.

There were instances where there was a black line obliterating the code (?) on the back of some of the printed photos/enlargements. It was a mystery as to who or why and even what had been obliterated. One theory is that Ross had one way of coding his material and Franceschi another and so someone worked to ‘correct’ the deviations. Another theory is that when photographing Museum exhibits there is a bit of a dilemma - should the artefact be catalogued under the geographical code for the museum where it was photographed or the place where the artefact was found? This is a problem with short time exhibitions where artefacts are gathered for an arranged time and then sent back to their ‘home’ and not so relevant to permanent collections. When cataloguing such parts of the archive myself I wrote both codes.

The White Binder gives a few clues about the complexity of organising the archive and identifying un-coded sheets of negatives….(Look at the section on Norway, where a few things seem to ‘fall outside the system’ …these can be photos of friends who happened to be along for the ride for a few days or just views the photographer was moved by: or villages and towns were originally misplaced and catalogued in the wrong fylker. See N4-4 Torpo and N4-2 Hurum ). I can see in the copy I have that I was not always consistent in what I did with these anomalies.

It was a steep learning curve trying to identify artefacts to give the White Binder some meaning! I contacted academics at Museums in Copenhagen, maybe they were friends of Troels’ and was always helped in identification. Eg. DK44-1-15 negatives 1-24 : I have a letter from Soren Kaspersen identifying two Norwegian, one is from Island, ‘helgenskrin’ with their inventory numbers 9085 and CMXIII and deciphering of carvings. (Interesting to note that the National Museum also lacks consistency in it’s numbering systems.) I was always using our reference books, ringing museums and after work checking out what Silkeborg Public Library had to offer too!

I have some notes I took down from Troels on the sorts of artefacts the individual apostles would hold and the dates of the various historical periods and their names in Danish!!

Physically the archive was being taken out of the boxes and installed in a set of filing cabinet drawers. At some points I would find more negatives and photo enlargements for, say DK and so the drawers would have to be man handled to make room for yet another empty drawer. Norway and France would have to be shunted further along the wall. I was always willingly helped in this by Lars Bay and John Sand who worked at the museum at this time.

I was invited to the opening of the exhibition in Copenhagen ‘Asger Jorn og 10,000 års Nordisk Folkekunst’ at the Nationalmusee, Fredericksholm Kanal on the 14th or 15th November 1995. It was an amazing experience to see some of the artefacts for real…Golden Altars especially. Also it was good to see Tove Nyholm again who worked on the exhibition. I have a lovely letter from Troels (14-10-95) about how useful the White Binder was when the exhibition was being finalised and the material was coming alive.

My appreciation of Norman (Romansk) stone sculpture, in particular, was born which is evident in my chosen photographic subjects.

I can truthfully say that my sojourn at Silkeborg Kunst Museum was the most interesting and moulding part of my life. (My daughters would laugh when I put the dry ingredients into jars and place them alphabetically on the shelves: a hang up from ordering, cataloguing, and annotating with labels in both languages!) In 2005 I went to University in Plymouth and took my degree in Fine Art Practices graduating in 2010, just after my 60th birthday. My time immersed in Jorn’s world was a foundation that stood me in very good stead and Troels Anderson’s academic rigour was a bench mark to live up to!

This probably doesn’t tell you the things you wanted to know….but this is what I can think of immediately. I still have my copy of Signes Gravés with it pieces of green card in from the early days of cataloguing. I have been in another world for the last couple of days, just reading the clippings and articles I have collected about Jorn, the Museum and looking through the White Binder…it is a good place to be!