What is (contemporary) comparative vandalism? 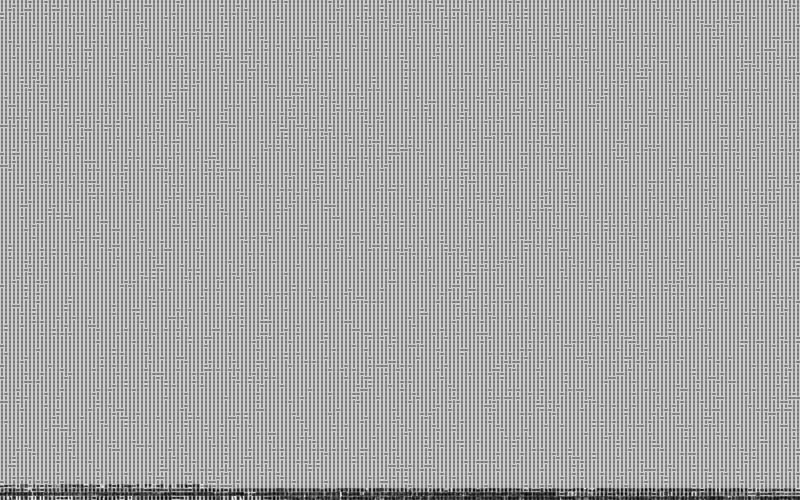 Anatomy of a filing cabinet

Tracing an image (an exercise)

Description of the filing cabinet structure

Where is the image? (part two)

The simple question where is the image points in various directions. One can answer by trying to find where it has been taken. To find a photograph in the filing cabinet one needs to know roughly the country and region of the photograph. The obvious reference for this is to be found in logbooks, the white binders and of course geographical maps. But once we know the location we need to follow a series of indexes and references that connects all these informations together to open the right cupboard, then the right folder then locate the exact document. But there again where is the image? Is it in the negative? The contact sheet? Or the enlargement? Or somewhere in between?

Beware the following is still in progress

Is it about images? Where it the image? About a device, not only a collection of images. The device combines images with indices, indexes and is a machine to generate groupings and permutations (ie. A sorting can be done with a set of previews that replaced by enlargements in high resolution). Orders can be changed at will. It is by no means a static set of images.

Cinema also combines images with a certain order to produce the illusion of movement and sequences can be moved on the editing table Film editing could be viewed as ordering. But the idea behind the material collected for a movie is to produce one version of the narration. On the contrary the device behind the SISV is generative, it is a matrix that can produce an infinity of variations: SISV books, la langue crue et la cuite, The Situationist Times, etc.

They are images of images second hand image, Richard Hamilton He says 19th century art has been about creating images of the world. 20th century is busy with second hand images Images that are not direct representations But what is a second hand? The hand described by Henri Focillon as the bad hand, the one that does not possess mastery, the hand without which we would have ended perfect monkeys able to perform all kinds of tricks. Tracing with the second hand.

The archive of the SISV is an archive of analog images. When "converted" in a digital format why does one representation of this image does count as the reference instead of others? The black and white "copy" (on the left) more than the countours detection (in the center) or the histogram (on the right)? Why do we need to favor the "retinal equivalent"? Can't we look for another kind of relationship, for another kind of dialogue that challenges this representation? 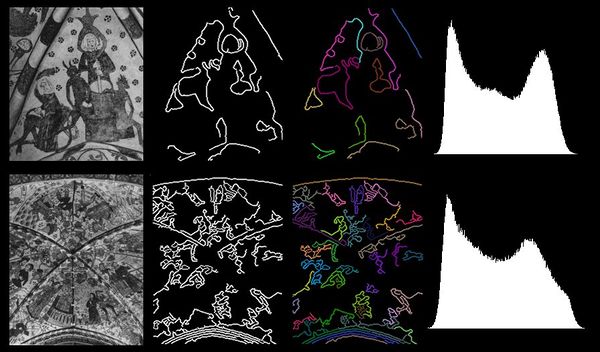 "[...] does what we have available to us now deserve the name of photography? Is it of the same order as what was possible with the earlier technology and whit a paper support? If one can erase images, since the imprint is no longer supported by a "support", at least not the support of a stable paper substance, this means we no longer have to do, one might say, with the recording of an image, even though one is recording something: recording an image would become inseparable from producing an image and would therefore lose the reference to an external and unique referent. As was perhaps always the case without realizing it, we would be dealing with a photographic performativity, a notion that some might find scandalous and that singularly complicates - without dissolving it - the problem of reference and truth: the problem of a truth to be made as Saint Augustine would have said, no less than revealed, unveiled, explicated, clarified, exposed, developed.[...] This question may be of interest to us [...] because of what it can teach us about what the structure of the old technology already was. Can we not say that there was already in photography, in the classic sense, as much production as recording of images, as much act as gaze, as much performative event as passive archivization? The indispensible recourse to a certain type of material support ( a nonelectronic support such as paper) does not signify an absolute passivity in this respect, nor therefore a recording process without any productive inscription. Is it necessary to recall that in photography there are all sorts of initiatives: not only framing but point of view, calculation of light, adjustment of the exposure, overexposure, underexposure, etc.? These interventions are perhaps of the same type as those in a digital treatment. In any case, to the extent that they produce the image and constituted something of an image [de l'image], they modify reference itself, introducing multiplicity, divisibility, substitutivity, replaceability. [...] Retrsopectively, the digital treatment of the image obliges us more than ever (for we did not need the digital in order to do this) to reconsider the supposed referentiality or passivity in relation to the referent from the very beginning, the very first epoch so to speak, of photography [...]" Jacques Derrida interviewed in Copy, Archive, Signature, pp 5-7.

"[…] the ornament as spontaneous arabesque. The typical characteristic of constructed monumental decoration is that it will seek to form a finite whole, whereas the organic arabesque, even though it may consist of fully rounded elements within a greater whole, as moving elements within that greater whole. Put briefly, one may define monumentalist decoration as static ornamentation and arabesque as dynamic ornamentation." Asger Jorn, What is an ornament? (1948)

Signs and Wonders (or strange acts) 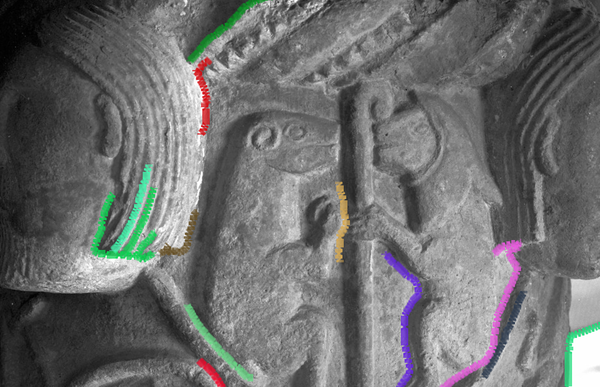 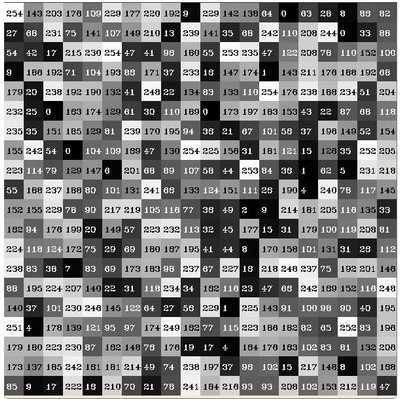 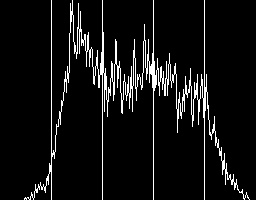 Histograms in the distance

An exercise in creating clusters of images based on their histograms and visualizing them.

Image histograms are present on many modern digital cameras. Photographers can use them as an aid to show the distribution of tones captured, and whether image detail has been lost to blown-out highlights or blacked-out shadows. 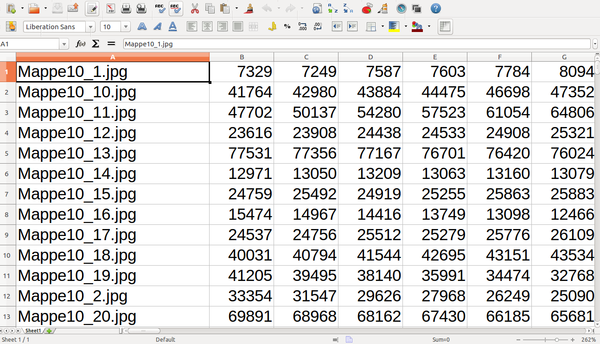 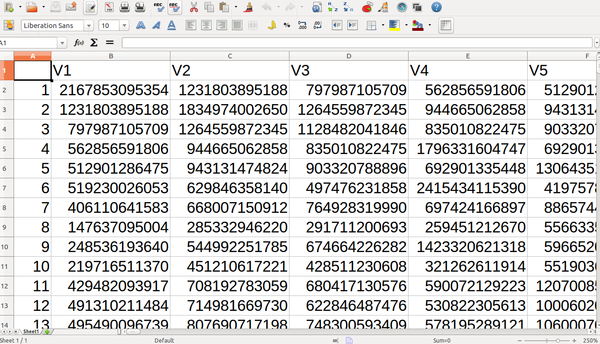 MDS is a set of statistical techniques used to visually depict the differences and similarities from a set of distances. For Classical MDS, the process takes a distance matrix that specifies the distance between every pair of points in our data set and returns a set of coordinates for those two points that approximate those disctances, The reason we need to create an approximation is that it may not be possible to find points in two dimsensions that are all separated by a specific set of distances. For example, it isn't possible to find four points in two dimensions that are all at a distance of 1 from each other. (To convince yourself of this, note that three points that are all at a distance of 1 from each other are the tips of a triangle. There isn't any way to find another point that's at a distance 1 from all three points on this triangle.) Drew Conway & John Myles White, Machine Learning for Hackers, O'Reilly, 2012. 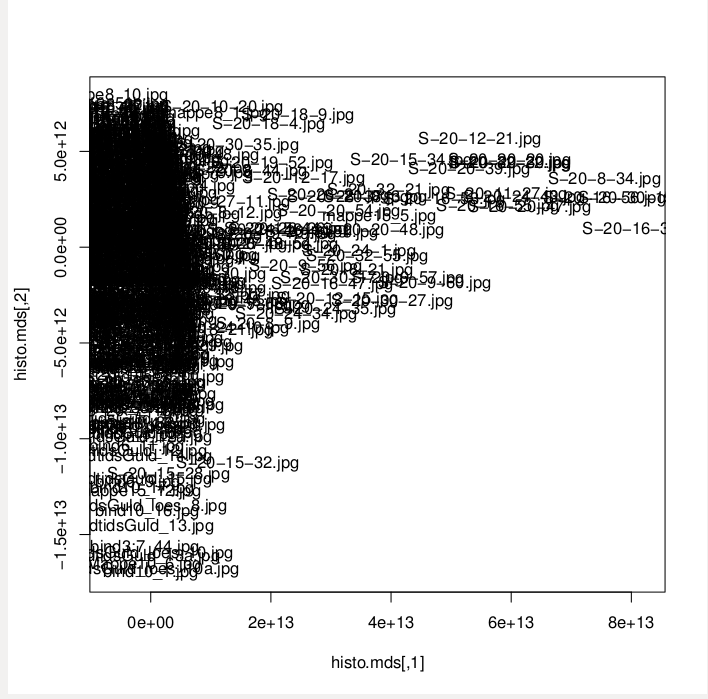 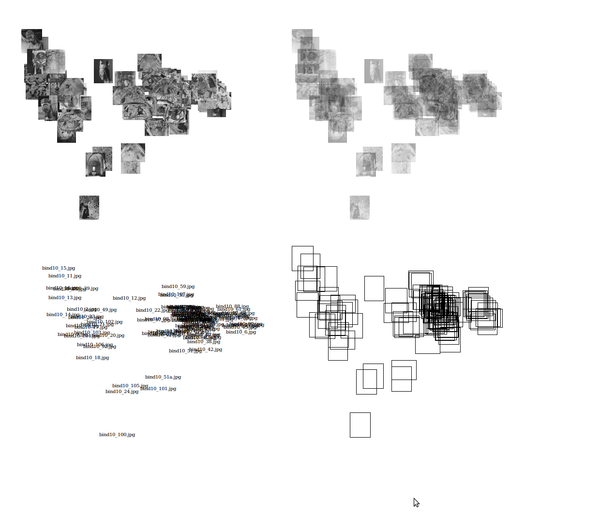 Four different views based on the histograms of one folder. 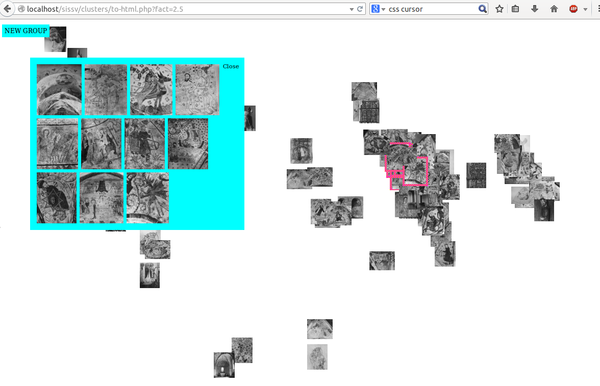 An interface to interact with the plots generated and select bands of values in the histograms. 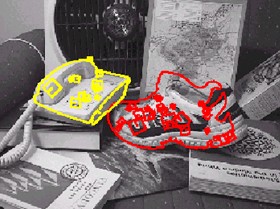