After we, a couple of months ago, launched our Scandinavian Institute of Contemporary Comparative Vandalism (SISSV), a lot of people have wondered why we chose this peculiar name, not knowing whether they should take it seriously or not. Now we invite you to a workshop where we will describe the background for our actions as well the appeal of this name. Together with special guests Teresa Østergaard Pedersen (Aarhus University / Museum Jorn) and Matthew Fuller (Goldsmiths College) we will approach the archive of the Scandinavian Institute of Comparative Vandalism (SISV) wondering:

These questions and many others in more than 25,000 iterations.

The workshop will take place at the Museum Jorn on Saturday 20 September from 11:00-16:30 and will include lectures as well as hands on work sessions with the SISV archive. Please take a laptop with you, if you have one.

In 1965 Asger Jorn closed down the Scandinavian Institute of Comparative Vandalism (SISV), announcing in the annual report of the institute that the shut-down was temporary and that SISV would reopen in three years’ time. He locked the door of the institute, barring Gérard Franceschi from access to the 25,000 photographs he and other photographer’s had been commissioned to take for SISV (the dispute over the legal rights to the images would only be solved decades later). One of the aims of the SISV had been to produce a total image of Nordic folk art through 10,000 years, presented in a 32 volume series of coffee-table books. When the project folded in 1965, Jorn had only managed to produce a pilot for the first book in the series (devoted to 12th century stone sculptures of Scania). Half a century later we propose a contemporary and temporary re-materialization of SISV, re-opening the gates to the archive and trying to activate its holdings. The idea is not to complete an unrealized project, but to explore SISV from a standpoint emphatically rooted in the present (in like manner, Jorn’s interest in the past “10.000 years of Nordic Folk Art” was always motivated by contemporary artistic and political concerns). The Scandinavian Institute of Contemporary Comparative Vandalism (SISSV) regards SISV as a threefold point of departure, namely i) a folded book project, ii) an extensive photographic archive and library of books, iii) a modus operandi for research combining academic approaches with artistic procedures. 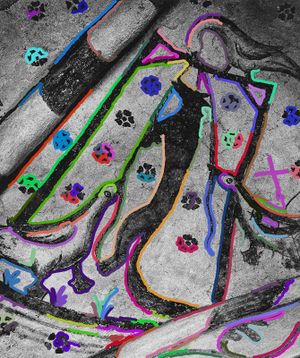 Jorn’s own work with the photo archive took place on paper (making photographic prints, ordering them in boxes, collating prints in albums, writing lists and indexes of images and motives, using printed contact sheets as tables upon which he selected and planned the cropping of images, making book dummies etc.), with analogue photography being the enabling technology that allowed him to work towards the construction of a total image of 10.000 years of Nordic Folk Art. Today, digital technologies allow for new ways of handling the material. A prospective digitization of the SISV image archive would transform the archive at every level (inscription, storage, access, indexing, metadata, etc.). Working with the archive before full scale digitization begins, will allow SISSV to consider this work and its implications as well as familiarize itself with other tools and methods than the ones usually on offer.

The photographic darkroom comprises the enlarger whose optical lens reverses the photographic exposure, and baths of interacting chemicals to develop and fix the resulting cast images. Throughout, the photographic process remains open to the intervention the photographer / print maker, by varying the timing of exposure, dodging and burning by means of physically blocking the projected light, or by varying the timing or composition of the chemical baths. In this workshop, we aim to construct a digital equivalent of the photographic darkroom, a loop from scanner to digital projector, with algorithmic lenses in place of the optical, and computational processes replacing the chemical. In doing this, the goal is to touch and "smell" the digital, to de-naturalise familiar tools and break open the "black boxes" of software to expose their inner particularities, historicity, and inherent limitations and blind spots, in search of an experience of working "hands on".

The photographic contact sheet is produced by laying the developed photographic negative (cut in strips) against a sheet of photographic paper, exposing it briefly with light and then developing and fixing the paper. The process reverses the negative image making it's "positive" readable (once fixed) in daylight. Framing the images, the silouette of the negative, with sprocket holes, and textual information such as the frame number or the make of the film is also printed. In addition, the contact sheet provides a literal means of "getting a grip" on a collection of photographic images; the paper becomes a new surface for further annotation with a grease pencil and images can be placed in juxtaposition to others simply with the aid of a pair of scissors. The contact sheet acts therefore not only as a means to preview the images but also as a rudimentary editing tool.

Every act of copying a digital file is a kind of contact print, as the stream of "ones and zeroes" of one storage medium is electronically pressed into the ever-porous binary surface of another. As in the photographic example, metadata accompanies the visual pixels. In contrast to the photographic, primarily algorithmic rather than chemical processes shape the meaning of the recorded bits, and must be continuously applied to "negate" the image and make it once again readable. What, then, is the equivalent of the digital contact sheet — one that provides an overview and gives the viewer a handle to the various potentials of the images? What are the digital equivalents to the scissors and grease pencil to allow the newly projected surfaces to be rewritten and edited?

What if we look at the scanner not only as a practical digital photocopier but as a tool that can be extended to look at the entire archive, something that can (make us) scan and skim, minutely observe and look over rapidly? A scanner gone back to its etymological root from the Late Latin scandere "to scan verse". A device trying to mark off verses in digital images, fueling its algorithms with matrices of pixels rather than the metric feet. As we know from poetry, verses are structures aimed at creating an aesthetic effect, but also to create a mnemonic one. How, then, scan the archive to mark off the poetic structures that reveal the mnemonic dimensions of 10.000 years of Nordic folk art?